Of all disciplines, deep learning is probably the one where research and practice are closest together. Often, something gets invented in research and is put into production in less than a year. Therefore, it’s good to be aware of research trends that you might want to incorporate in projects you are working on.

Because the number of ML and AI papers increases exponentially, there’s no way that you can read every paper. Thus, you need other methods to keep up with research. This lecture provides a sampling of research directions, the overall research theme running across these samples, and advice on keeping up with the relentless flood of new research.

Semi-supervised means half supervised, half unsupervised. Assuming a classification problem where each data point belongs to one of the classes, we attempt to come up with an intuition to complete the labeling for the unlabeled data points. One way to formalize this is: If anything is close to a labeled example, then it will assume that label. Thus, we can propagate the labels out from where they are given to the neighboring data points.

How can we generalize the approach above to image classification?

With deep unsupervised learning, we can transfer the learning with multi-headed networks.

The key hypothesis here is that: For task 1 (which is unsupervised), if the neural network is smart enough to do things like predicting the next word in a sentence, generating realistic images, or translating images from one scale to another; then that same neural network is ready to do deep supervised learning from a very small dataset for task 2 (what we care about).

For instance, task 1 could be predicting the next word in a sentence, while task 2 could be predicting the sentiment in a corpus. OpenAI’s GPT-2 is the landmark result for next-word prediction where deep unsupervised learning could work. The results were so realistic, and there was a lot of press coverage. OpenAI deemed it to be too dangerous to be released at the time.

Furthermore, GPT-2 can tackle complex common sense reasoning and question answering tasks for various benchmarks. The table below displays those benchmarks where GPT-2 was evaluated on. The details of the tasks do not really matter. What’s more interesting is that: This is the first time a model, trained unsupervised on a lot of text to predict the next token and fine-tuned to specific supervised tasks, beats prior methods that might have been more specialized to each of these supervised tasks. 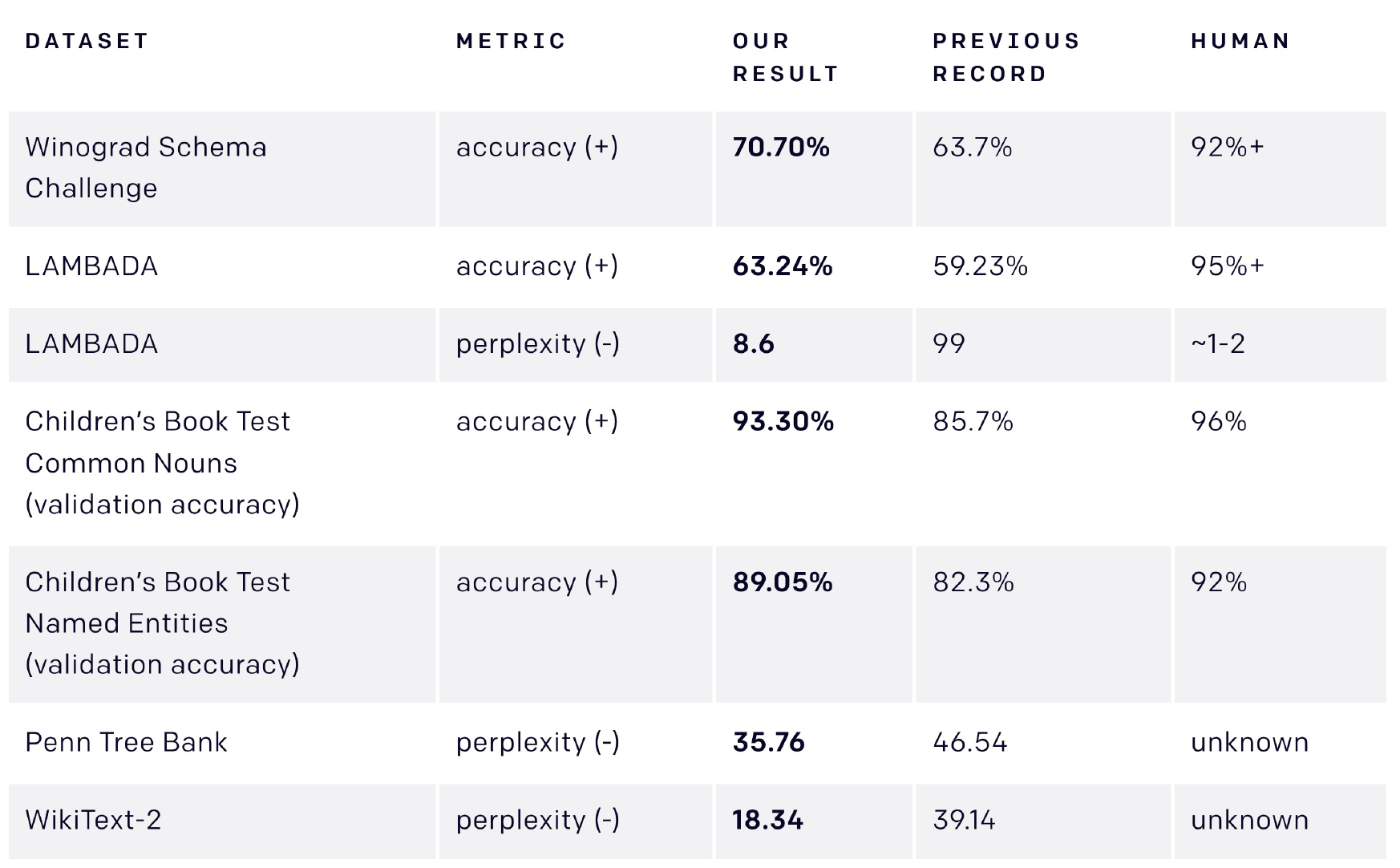 Another fascinating insight is that as we grow the number of model parameters, the performance goes up consistently. This means with unsupervised learning, we can incorporate much more data for larger models. This research funding inspired OpenAI to fundraise $1B for future projects to essentially have more compute available to train larger models because it seems like doing that will lead to better results. So far, that has been true (GPT-3 performs better than GPT-2).

The table below displays BERT’s performance on the GLUE benchmark. The takeaway message is not so much in the details of these supervised tasks; but the fact that these tasks have a relatively small amount of labeled data compared to the unsupervised training that happens ahead of time. As BERT outperformed all SOTA methods, it revolutionized how natural language processing should be done.

BERT is one of the biggest updates that Google has made since RankBrain in 2015 and has proven successful in comprehending the intent of the searcher behind a search query.

Can we do the same thing for vision tasks? Let’s explore a few of them.

You then fine-tune with a simple linear classifier on top of training completely unsupervised. This means that you must get the right features extracted from the images during training. The results of contrastive learning methods confirm that the higher the number of model parameters, the better the accuracy.

Reinforcement learning (RL) has not been practical yet but nevertheless has shown promising results. In RL, the AI is an agent, more so than just a pattern recognizer. The agent acts in an environment where it is goal-oriented. It wants to achieve something during the process, which is represented by a reward function.

Compared to unsupervised learning, RL brings about a host of additional challenges:

Despite these challenges, some great RL successes have happened.

DeepMind has shown that neural networks can learn to play the Atari game back in 2013. Under the hood is the Deep Q-Network architecture, which was trained from its own trial-and-error, looking at the score in the game to internalize what actions might be good or bad.

The game of Go was cracked by DeepMind - showing that the computer can play better than the best human player (AlphaGo, AlphaGoZero, and AlphaZero).

RL also works for the robot locomotion task. You don’t have to design the controller yourself. You just implement the RL algorithm (TRPO, GAE, DDPG, PPO, and more) and let the agent train itself, which is a general approach to have AI systems acquire new skills. In fact, the robot can acquire such a variety of skills, as demonstrated in this DeepMimic work.

You can also accomplish the above for non-human-like characters in dynamic animation tasks. This is going to change how you can design video games or animated movies. Instead of designing the keyframes for every step along the way in your video or your game, you can train an agent to go from point A to point B directly.

RL has been shown to work on real robots. 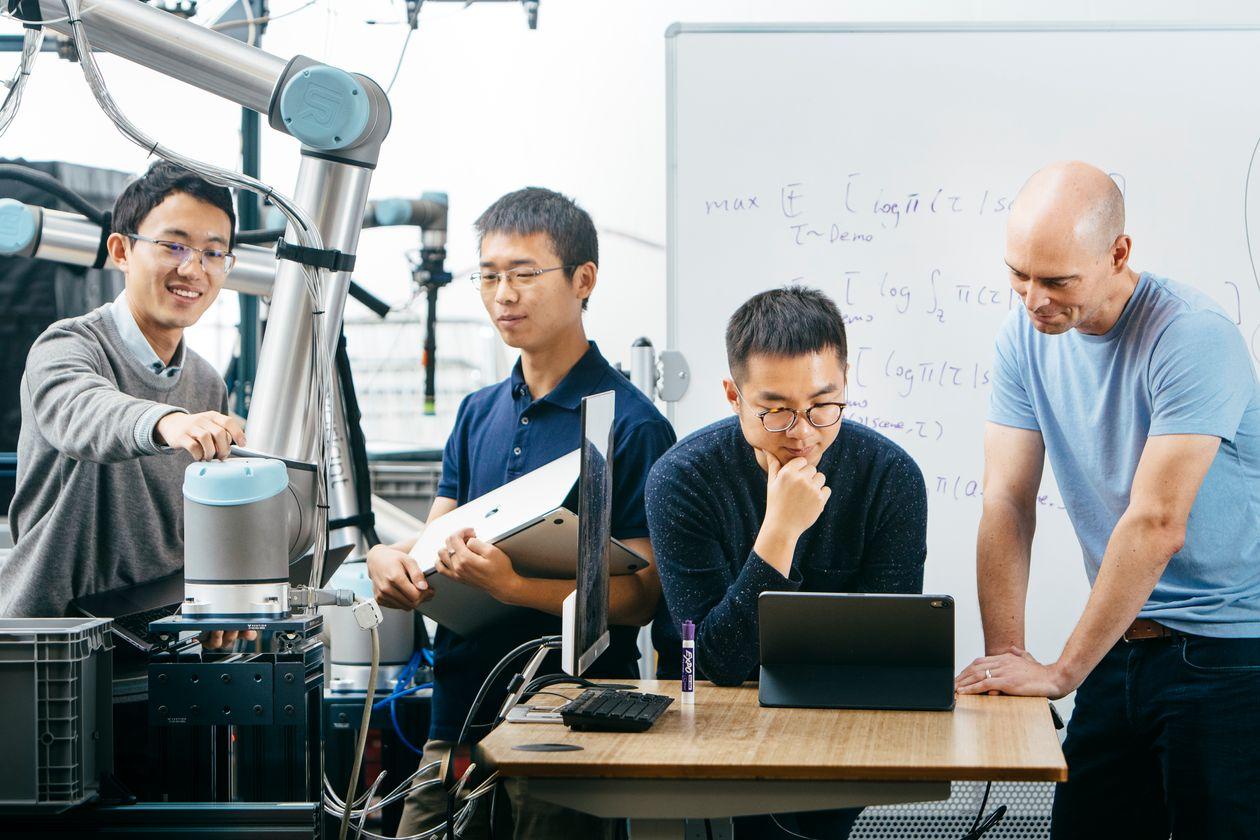 The fact that RL worked so well actually inspired Pieter and his former students (Tianhao Zhang, Rocky Duan, and Peter Chen) to start a company called Covariant in 2017. Their goal is to bring these advances from the lab into the real world. An example is autonomous order picking.

RL achieved mastery on many simulated domains. But we must ask the question: How fast is the learning itself? Tsividis et al., 2017 shows that a human can learn in about 15 minutes to perform better than Double DQN (a SOTA approach at the time of the study) learned after 115 hours.

How can we bridge this learning gap?

Based on the 2018 DeepMind Control Suite, pixel-based learning needs 50M more training steps than state-based learning to solve the same tasks. Maybe we can develop an unsupervised learning approach to turn pixel-level representations (which are not that informative) into a new representation that is much more similar to the underlying state.

The results confirm that CURL can match existing SOTA approaches that learn from states and from pixels. However, it struggles in hard environments, with insufficient labeled images being the root cause.

Can we develop a fast RL algorithm to take advantage of this?

Formally speaking, RL^2 maximizes the expected reward on the training Markov Decision Process (MDP) but can generalize to testing MDP. The RL agent is represented as a Recurrent Neural Network (RNN), a generic computation architecture where:

RL^2 was evaluated on a classic Multi-Armed Bandit setting and performed better than provably (asymptotically) optimal RL algorithms invented by humans like Gittings Index, UCB1, and Thompson Sampling. Another task that RL^2 was evaluated on is visual navigation, where the agent explores a maze and finds a specified target as quickly as possible. Although this setting is maze-specific, we can scale up RL^2 to other large-scale games and robotic environments and use it to learn in a new environment quickly.

People often complement RL with imitation learning, which is basically supervised learning where the output is an action for an agent. This gives you more signal than traditional RL since for every input, you consistently have a corresponding output. As the diagram below shows, the imitation learning algorithm learns a policy in a supervised manner from many demonstrations and outputs the correct action based on the environment. 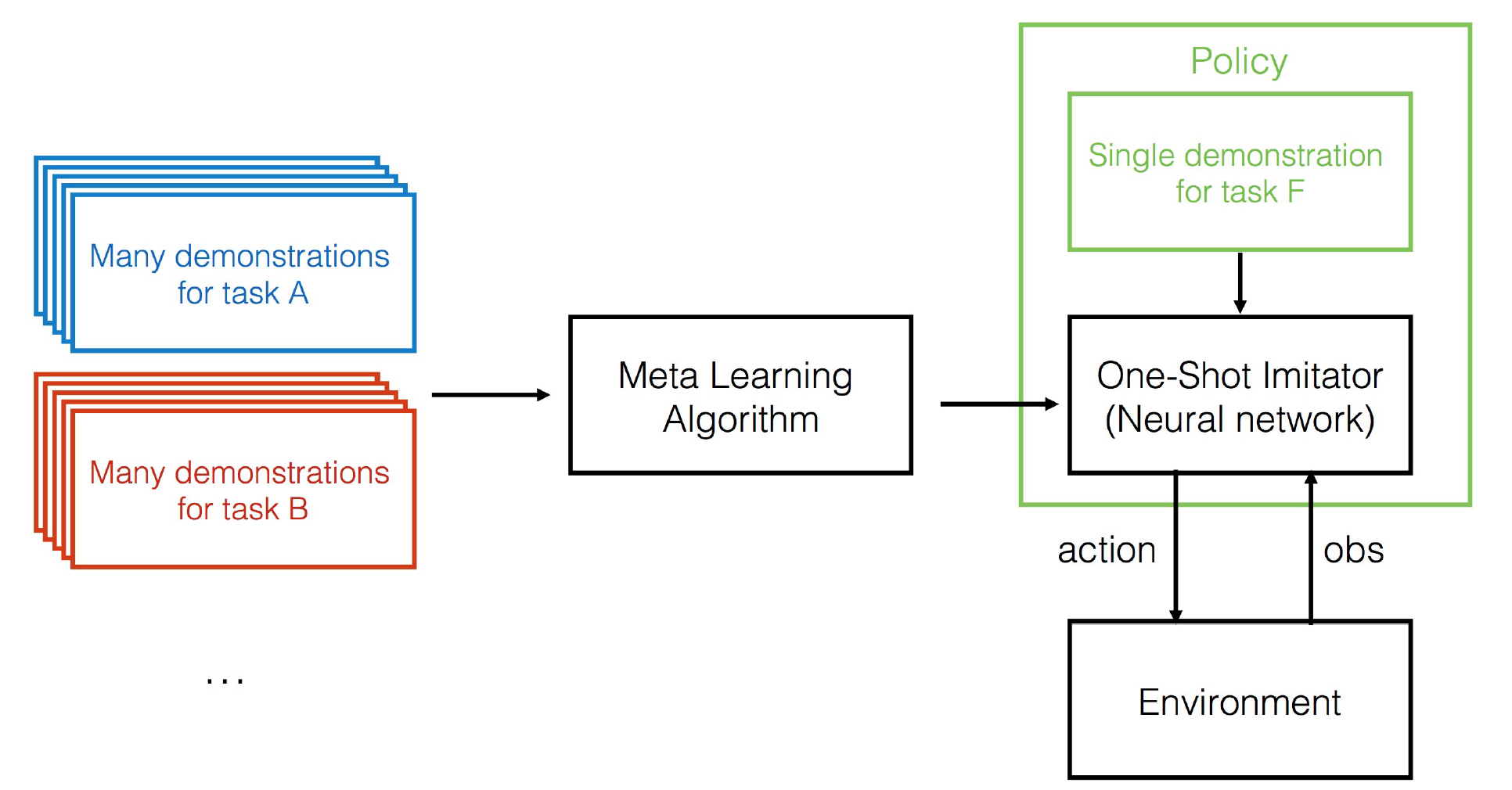 Conveniently, one-shot imitators are trained using traditional network architectures. A combination of CNNs, RNNs, and MLPs perform the heavy visual processing to understand the relevant actions in training demos and recommend the right action for the current frame of an inference demo. One example of this in action is block stacking. 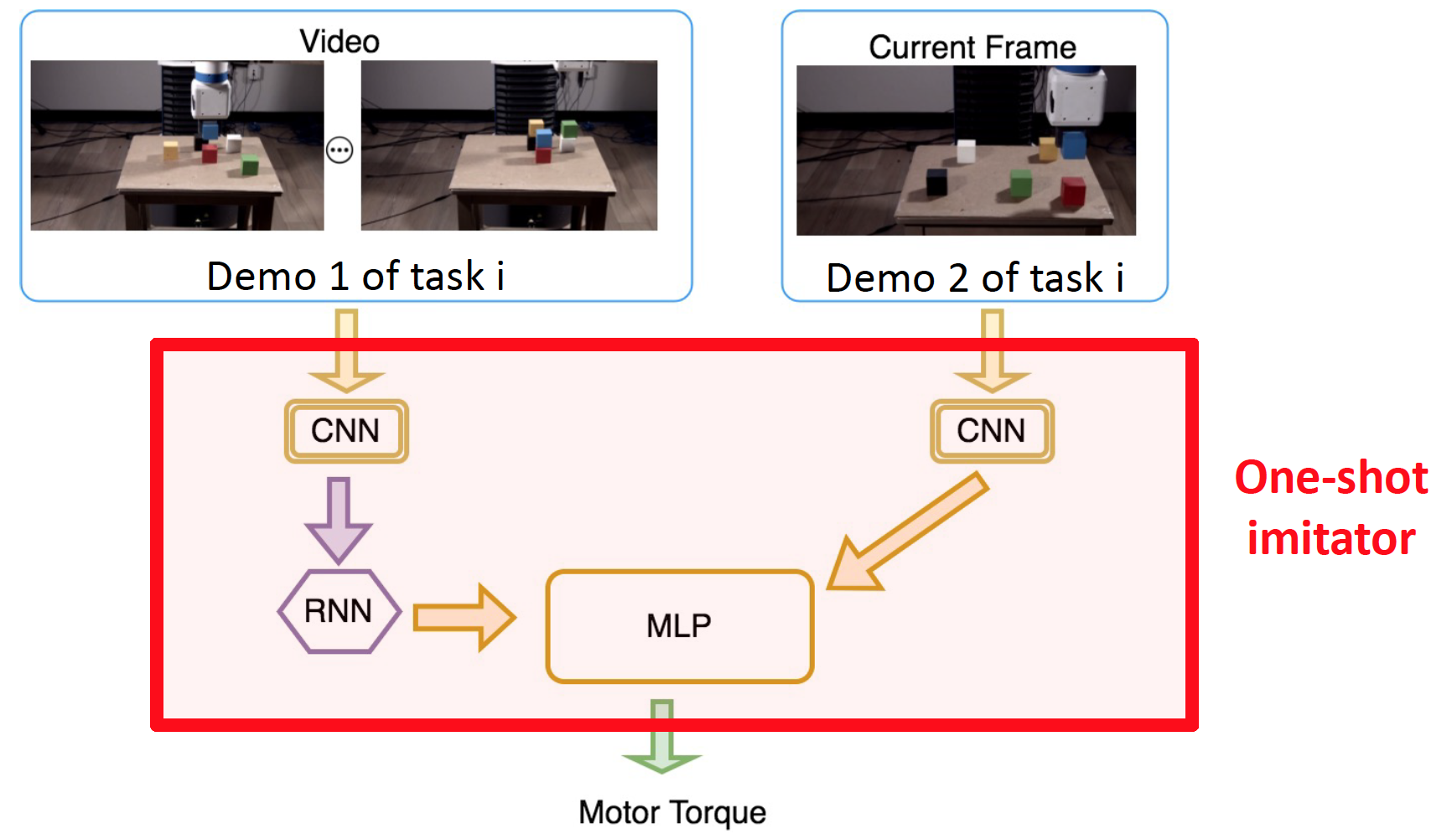 Simulated data collection is a logical substitute for expensive real data collection. It is less expensive, more scalable, and less dangerous (e.g., in the case of robots) to capture at scale. Given this logic, how can we make sure simulated data best matches real-world conditions?

One approach is to make the simulator you use for training models as realistic as possible. Two variants of doing this are to carefully match the simulation to the world (James and John, 2016; Johns, Leutenegger, and Division, 2016; Mahler et al., 2017; Koenemann et al., 2015) and augment simulated data with real data (Richter et al., 2016; Bousmalis et al., 2017). While this option is logically appealing, it can be hard and slow to do in practice. 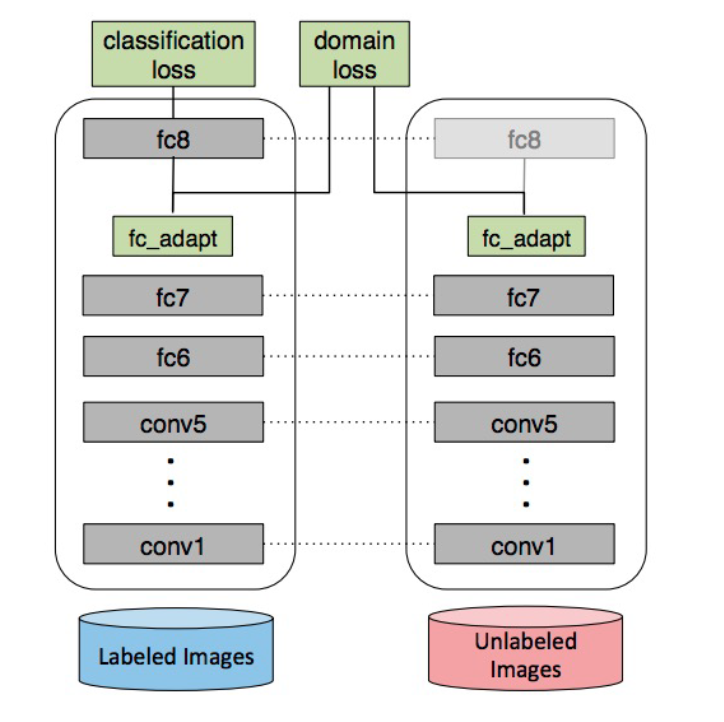 Finally, a simpler approach called domain randomization (Tobin et al., 2017; Sadeghi and Levine, 2016) has taken off of late. In this approach, rather than making simulated data fully realistic, the priority is to generate as much variation in the simulated data as possible. For example, in the below tabletop scenes, the dramatic variety of the scenes (e.g., background colors of green and purple) can help the model generalize well to the real world, even though the real world looks nothing like these scenes. This approach has shown promise in drone flight and pose estimation. The simple logic of more data leading to better performance in real-world settings is powerfully illustrated by domain randomization and obviates the need for existing variation methods like pre-training on ImageNet.

7 - Deep Learning For Science and Engineering

In other areas of this lecture, we’ve been focusing on research areas of machine learning where humans already perform well (i.e., pose estimation or grasping). In science and engineering applications, we enter the realm of machine learning performing tasks humans cannot. The most famous result is AlphaFold, a Deepmind-created system that solved protein folding, an important biological challenge. In the CASP challenge, AlphaFold 2 far outpaced all other results in performance. AlphaFold is quite complicated, as it maps an input protein sequence to similar protein sequences and subsequently decides the folding structure based on the evolutionary history of complementary amino acids.

Other examples of DL systems solving science and engineering challenges are in circuit design, high-energy physics, and symbolic mathematics.

As compute scales to support incredible numbers of FLOPs, more science and engineering challenges will be solved with deep learning systems. There has been exponential growth in the amount of compute used to generate the most impressive research results like GPT-3. 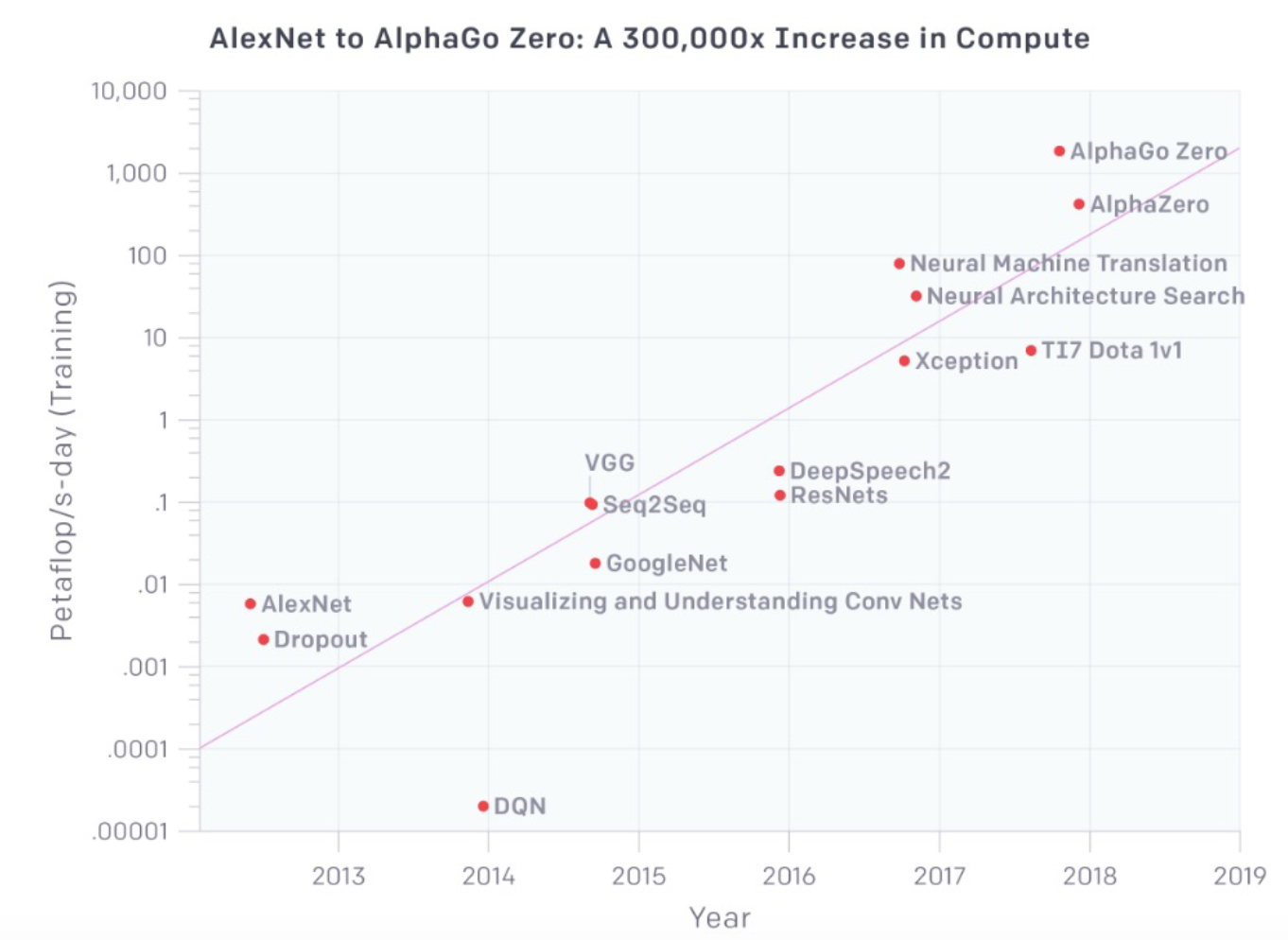 As compute and data become more available, we open a new problem territory that we can refer to as deep learning to learn. More specifically, throughout history, the constraint on solving problems has been human ingenuity. This is a particularly challenging realm to contribute novel results to because we’re competing against the combined intellectual might available throughout history. Is our present ingenuity truly greater than that of others 20-30 years ago, let alone 200-300? Probably not. However, our ability to bring new tools like compute and data most certainly is. Therefore, spending as much time in this new problem territory, where data and compute help solve problems, is likely to generate exciting and novel results more frequently in the long run. 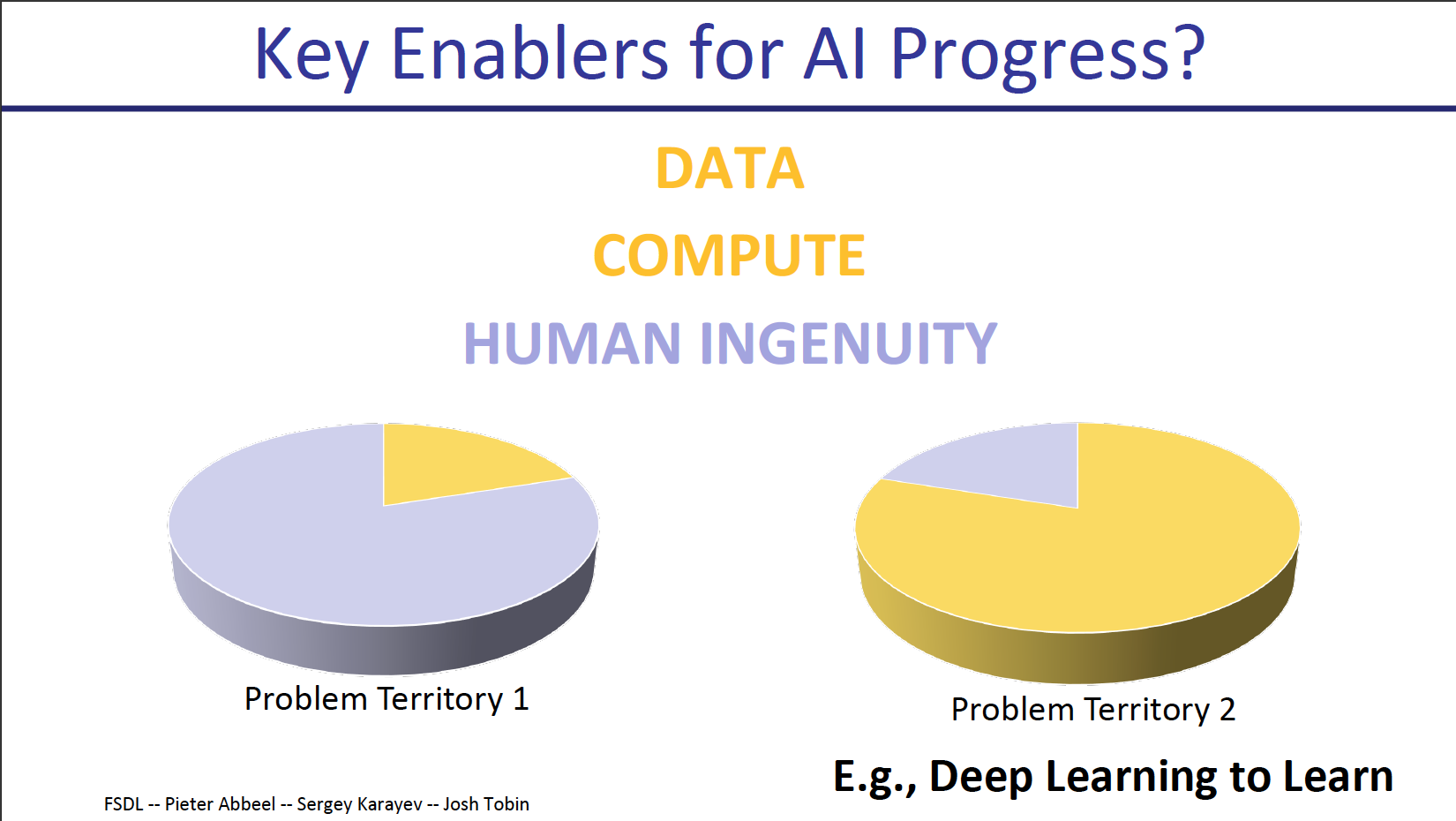 Here are some tips on how to keep up with ML research: 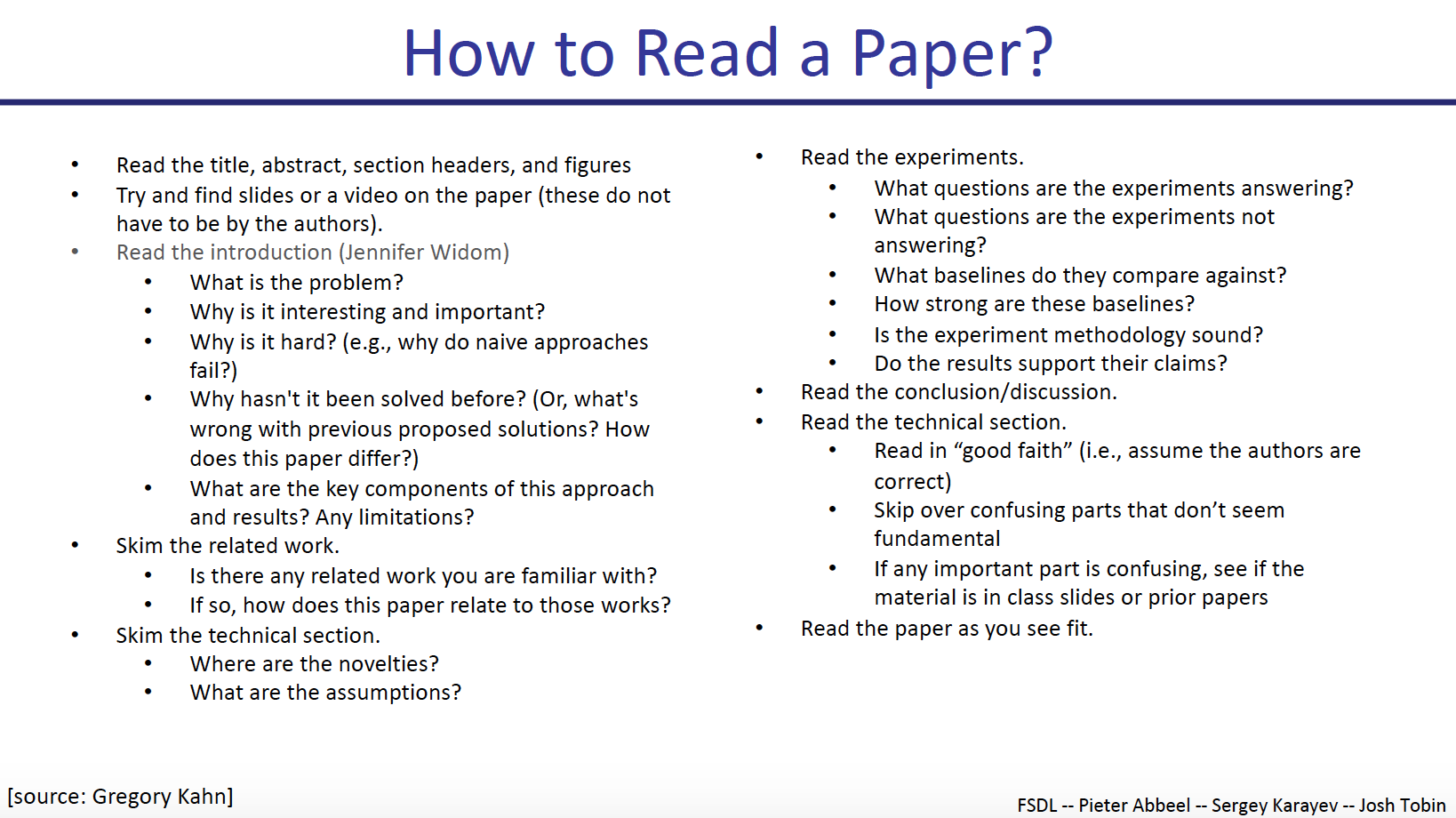 Finally, should you do a Ph.D. or not?